I’m not going to try to be a complete tourist guide to all the things there are to do and see on Molokai. Frankly the list is almost endless. Instead I would like to share the things about the Friendly Isle we have experienced and helped us make the decision to retire here.

Molokai is very unique from the other islands. It has a variety of climates from desert like conditions at the west end to lush tropical conditions at the east end of the island. The area of climate change is caused by the north easterly trade winds hitting the mountain slopes and the rain that results. 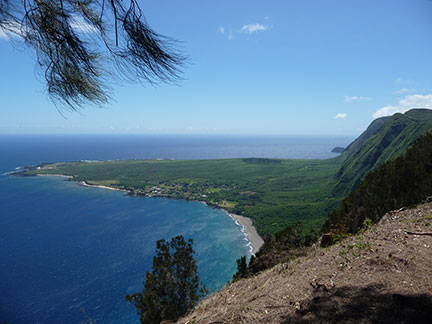 Temperatures range from 65-75 at night to 70-88 in the day. The trade winds almost always blow making it feel cooler. It really is a pretty ideal climate. The weatherman on the KHNL evening news in Honolulu, calls it ” The best weather on the planet!”

There is a barrier reef that runs almost the total length of the island’s southern shore and is the largest reef in the USA.  There are numerous ancient fishponds along the reef.

Kind of unique to Molokai is that the island has a large population of Axis or Indian Spotted deer which were imported in the late 1800’s.

There is one road that runs east/west and another road that runs north/south and cuts the island basically in half. The island is approximately 38 miles by 10 miles in size. Speed limits are either 35 or 45 mph. There are no traffic lights!

The population is around 8000 and composed of mostly locals of Hawaiian ancestry. In my mind, they are the friendliest people I have ever met anywhere. Most of the population lives in Kaunakakai the only significant city located in the middle of the island.

Development is not rampant and frankly discouraged.  A large portion of the land is Hawaiian Homestead land. 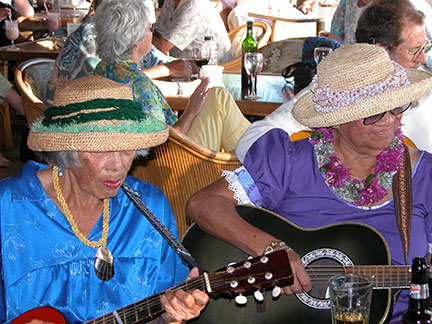 You come to Molokai to, as the locals say, “Share the Aloha”.  If your looking for night life with Bling, this isn’t the place.

There is Hawaiian time and Molokai time! If you’re looking for a place where you can just check out for a while, then this is your place!  You can hike, play tennis, golf, ride horses, fish, hunt, snorkel, dive or just vedge on a deserted beach.

There is a popular bumper sticker I see on the island that says, “Don’t change Molokai. Let Molokai change you!”.

During your stay you must go to the Hotel Molokai on Friday afternoon from 4 to 6pm to take in the Na Kupuna Hoaloha.

This is a group of locals who come together at the beachfront bar and play their ukuleles and other musical instruments for fun. They have a vast repertoire of Hawaiian music and almost always have a hula dancer or two.

Sip an adult beverage and share in the Aloha!  Make sure you stay for the singing of Aloha Oe at the end of their performance. 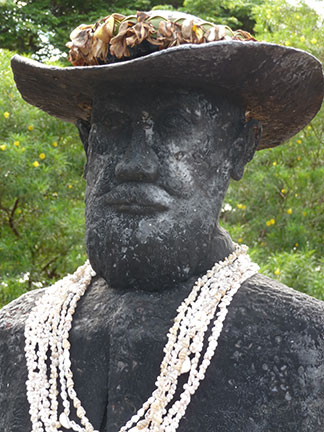 The name Father Damien and Molokai are hard to separate.  Kalaupapa Peninsula, on the north or windward side of the island, is home to the leper colony established in 1866. He arrived in 1873 and eventually caught the disease while tending the sick and dying and died there himself in 1889.

Father Damien was Canonized as Saint Damien the Blessed in 2009.

Though the disease has been cured for many years there is still a community there today.

You can ride the mule train down to the colony or, as some friends have done, you can actually hike down. There are guided tours in the town as you aren’t allowed to just wander around since it is designated as a National Historic Park.

As you drive along you will find many small deserted beaches for your pleasure.  Some of the beaches have ancient fishponds built of rocks.  The fisherman of the past built these walls so the pond fills up at high tide letting the fish in.  At low tide the receding water traps the fish in the pond where they are caught by net or other means.

There is a huge beach at the west end of the island called Papohaku. It is the longest beach in Hawaii and almost always deserted. 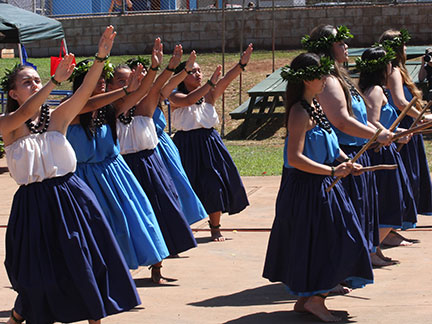 The Halawa Valley at the far east end of the island, is the place where the first settlers of Molokai arrived. There is still a settlement there and taro is grown in the valley to make Poi.

There are guided hikes up to the falls at the upper end of the valley. The amount of water coming down the falls is a function of the rain in the higher mountains. It is a beautiful place to visit. There is also a lovely beach there.

Molokai is considered the birthplace of the Hula and thus it is celebrated annually at the Moloka’i Ka Hula Piko celebration.